So I’m walking home from work tonight and get sucked in by a woman handing out postcards. Not only sucked in, but I gave in and let her give me the schpiel…she was promoting some workshops, and as she went through it, something caught my attention…

“And this one’s called ‘Bringing Out the Millionaire In You”.

I stopped dead in my tracks and tried not to bust out laughing right in her face. “I am quite sure that I don’t HAVE a millionaire in me!” (leaving out what I wanted to say, which was, “Unless I ate him!”)

She spouted some platitudes about “everyone has a unique gift, yada yada yada” and mentioned Bill Gates (an extremely useful and relevant comparison for a 47-year old who works in a call center…) and who knows what else. I had stopped listening, because all I could think about was the fact that I had to get a copy of that postcard, because blog fodder!!!

I acted like I was very interested in that particular card, handily cutting off her schpiel at the same time. I told her, “I’ll definitely think about it” and walked away, thinking about it. So really I told her the truth!

I’m thinking about it, all right. Thinking about how this is the funniest thing I have ever heard. Wondering if the millionaire inside of me is male or female, if he or she would like some pizza, if I should name my millionaire… 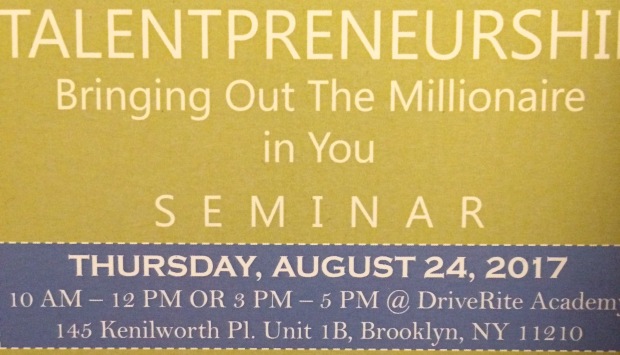 And then I laughed like Peppa Pig, which is to say that I laughed so hard that I snorted and fell on the ground.

Sooo…if you’re looking for me this weekend, I’ll be hanging out with my inner millionaire.

Feeling angsty today? Click to visit my whiny blog: I wanna love You better whatever it takes . . .

This is not a GoFundMe…

Go back in time!

L&B in Dumbo is not yet a reality, so we went off in search of other pizza. Bougie, delicious, and overpriced. The dollar slice (now only $1.25!) was the real winner, though.
“Oh, these are so cute!” I said. “They’re like little mini trays that you can put cookies on!” I said.
Yes, there is a piece of pumpkin pie embedded in the cheesecake. It’s like the Turducken of desserts…
Plenty of available seats but this stranger had to decide that they need togetherness with me?! Who DOES that? #TheyHadBetterBeTiny #MaybeIShouldMove
Ha ha, I see what you did there #CitizenAppNYC
Summer hair, finally! Max never steers you wrong…